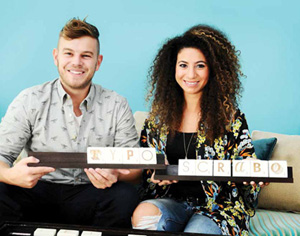 The hand-crafted labor of married couple, Thomas Shaw, an architect from Manchester, and Rama Salem, a graphic designer from Egypt who both studied at the Edinburgh College of Art.

Typoscrabo is a coffee table that doubles up as a typographic word game. Locally-made and customised to specific tastes, it’s gradually turning into the gift of choice for many here in the Kingdom. Functional furniture has never been this fun!

When did you start selling Typoscrabo?

Rama: Well, Typoscrabo originally started as a gift that Tom made for me.

Tom: Rama and I are Scrabble enthusiasts, especially Rama as she's always been a fan of anagrams and playing the game. For Christmas I decided to surprise her by making a huge Scrabble board made entirely out of reclaimed wood. I spent weeks at the workshop designing and constructing the board. The unique touch was choosing different typefaces for the letters to give the tiles a bit of character, and since she's a Graphic Designer who's into typography it seemed to be the perfect gift. At the time I had only made the board with the canvas sack, tiles and racks.

Rama: It was the most amazing gift I have ever received. I felt this sudden urge to show it off to the world! It was just so different from anything I had ever seen. We started thinking of ways to develop the board so it was more functional, and so the idea of transforming it into a table worked perfectly. I had posted it on my FaceBook and had friends come round and see it. Some of them were asking if they can get one made for their home. And so at that point we realised we could start to sell them. I created a brand and we gave it a name "Typoscrabo" a fusion between typography and a homage to Scrabble.

Tom: The very first BAB Market was just around the corner, so we submitted our proposal to them and they approved. I guess you could say that was when we first started selling the tables.

Perry is currently residing in Dubai, exploring the art scene and taking on new opportunities that come her way.

Hush-Hush was originally created for an art mural, to celebrate the opening exhibition of ‘Have You. Need You’ in 2012. The artwork was painted live outside the Al Riwaq Art Space in Bahrain. The exhibition was Perry’s first solo show, where she explored the theme of companionship, and it’s significance in social and emotional comfort.