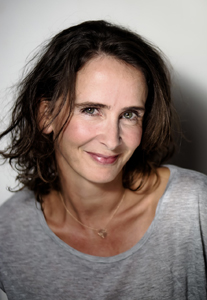 Virginie Dreyer, creator of TinyOm, was – in what now seems another lifetime – a lawyer in Paris. It was her family circumstances that brought her to the Middle East, where she has been able to explore her creative desires. She trained in graphic art and design and, seduced by the art and craftsmanship of local goldsmiths in Bahrain, her adopted home, she began to visualize creating a line of jewellery. Already passionate about yoga, which she practices and teaches, Virginie was moved to base her creations on its philosophy. What she desired most was to create jewellery with a symbolic value and meaning.

Through her yoga practice she has also been inspired to create TeenyTinyOm, a little yogi whose philosophical journey is a reflection of her own. Virginie, originally from France, now lives with her family in Bahrain and shares her time between her husband and two daughters, TinyOm, her yoga teaching and practice, and her TeenyTinyOm mini yogi illustrations.